Featured episode: Put that Light Out 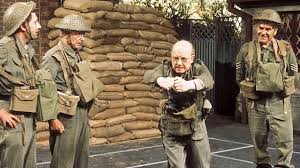 Yesterday BBC2 repeated the episode Put That Light Out, originally broadcast on the 6th November 1970.

This episode was based on an idea by series producer Harold Snoad, taking his inspiration from warden Hodges’ catchphrase ‘put that light out’ – and applying it on a massive scale.

This episode could be classed as one of many ‘seven get into trouble’ tales: Jones, Godfrey, Frazer and Pike are stationed in the lighthouse, using it as a makeshift observation post. Unfortunately, far from safeguarding the folk of Walmington they manage to put them all in danger by switching on the lighthouse lamp and illuminating the town just as an air-raid begins. Mainwaring and Wilson, stationed on the front, are helpless to act until Hodges bullies them into attempting to shoot-out the lamp. With Godfrey, unaware of the danger he is in, standing directly in the line of fire the episode looks set to end in tragedy until Jones, in the nick of time, shuts off the power to the lamp.

The situation and setting are similar to Menace from the Deep, broadcast almost exactly a year earlier. The charm of this episode comes, in many respects, from the sub-plots. The episode benefits from a number of cameo-roles: Stuart Sherwin as a warden, Gordon Peters as the lighthouse keeper and Avril Angers as a telephone operator all of which add to the charm, with some particularly nice interplay between Walker and the telephone operator. The abiding image, however, will be of Godfrey, joyfully making rabbit silhouettes across the town of Walmington while Mainwaring, unaware,  aims a machine-gun directly at him. It is one of only a few moments in Dad’s Army when one of our stay-at-home heroes seems in genuine peril and gives the episodes closing moments an edge of danger.

All in all a lovely episode.

Oh Mr Mainwaring - you are a darling - Mrs Fox