Walmington-on-Sea was the wartime home of George Mainwaring, Arthur Wilson, Mavis Pike and all the characters from Dad’s Army. It is located on the south-coast of England, in Kent or maybe east Sussex. Far removed from the mass tourism of Blackpool, or the sophisticated sheen of the ‘royal’ resorts Walmington is a small, modest resort, perhaps a little like nearby Bexhill. 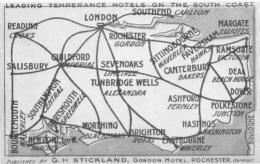 “If you were looking for a little peace and tranquility by the sea, Walmington-on-Sea has all you could want from a seaside town. Time seems to stand still in this sleepy little resort, and not just because the town hall clock stopped at ten past three in 1939.”

The definitive description of the town comes from its creators, Jimmy Perry and David Croft:

“It is only a little place. People with not too much money can retire there to spend their declining years in small houses and bungalows. In happier times, a string of neat comfortable Georgian guest houses could accommodate well-mannered families during the summer months. Mother and father could listen to the band while the children played on the fine clean sand, or the whole family could watch the Pierrots. Hopeful fishermen dangled their lines from the Pier. Stones Amusement Arcade housed some slot machines where for a penny you could watch a fireman slide up a ladder to rescue a woman from a burning house or see a murderer hanged or a French aristocrat guillotined.

The Novelty Rock Emporium turned out crisp mint rock and giant humbugs. But all that is gone now. The Pier has a twenty-foot gap in the middle, the beach bristles with barbed wire, criss-crossed scaffolding, pill boxes and concrete anti-tank blocks. Stead and Simpsons and Timothy Whites still carry on — so do Jones the Butcher, Frazer the undertaker, Hodges the Greengrocer and the Marigold Tea Rooms and Mr Mainwaring’s Bank.

But the threat across the channel is never far from their thoughts. Hitler is there with all his military might and make no mistake about it, when he launches his attack against Britain, Walmington-on-Sea will be in the Front line.”

What all? Oh, I see - Mainwaring