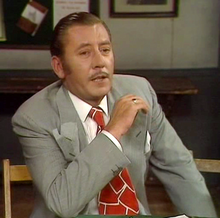 Time to get a bit reflective as we look at one of the saddest moments in Dad’s Army. In 1973, during the making of the sixth series, James Beck was taken suddenly ill while opening a charity event. He was rushed to hospital but died three weeks later on 6th August. His death, at the age of 44, marked a turning point in the series which was never the same again.

While he was ill in hospital a number of Dad’s Army episodes were being recorded in the studio, including Things that Go Bump in the Night. Anticipating Beck’s recovery the writers had to work around his absence from the studio scenes of episodes in which he had already appeared in location scenes.

In the opening moments of this episode Mainwaring berates Walker (in his absence) for failing to get enough petrol coupons to enable the platoon to get home. He tells Wilson to ‘take his name’, which the sergeant does by writing it in the condensation on the van’s window.

A touching tribute to a character who did so much to make Dad’s Army what it is, and to an actor who died tragically young.